Now that we know more about installing Ruby in Linux or Windows, launching the IRB interpreter, and the Ruby programming language, we have the path clear to start programming!
Let's launch our IRB console in the Operating System you usually use, and let's begin. 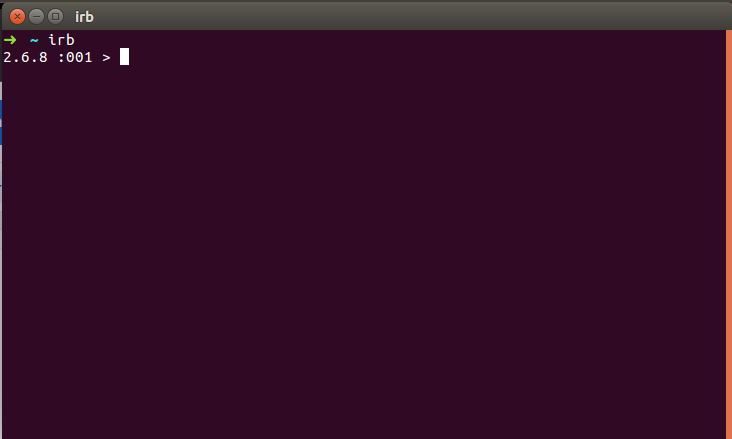 Strings are the first data type we'll know inside Ruby. A string is traditionally a sequence of characters. For instance, the string: "Hello World!" contains a total of 12 characters (including space and the "!" symbol). As we can see, it is a sequence of characters, and in computer programming is considered a data structure because each character is internally separated. So let's check it out visually:

A string is generally considered a data type. It is often implemented as an array data structure of bytes (or words) that stores a sequence of elements, typically characters, using some character encoding. The string may also denote more general arrays or another sequence (or list) data types and structures. Later we'll see what an array is; for now, let's just test it out in our IRB console. 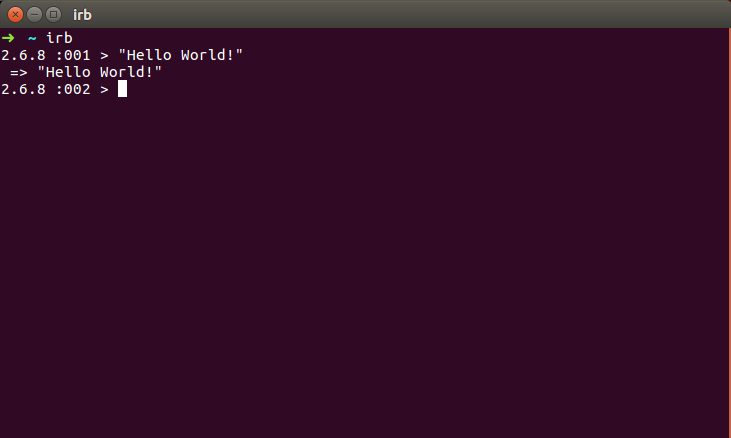 The first rule of the strings in ruby is that they need to be inside quotes (double or single). Once we hit enter, we can see the output of our string.

Another way we have to print a string is using the reserved word "puts" or "print ."The puts (short for "put string") and print commands are both used to display the results of evaluating Ruby code. The primary difference between them is that puts add a newline after executing, and print does not. 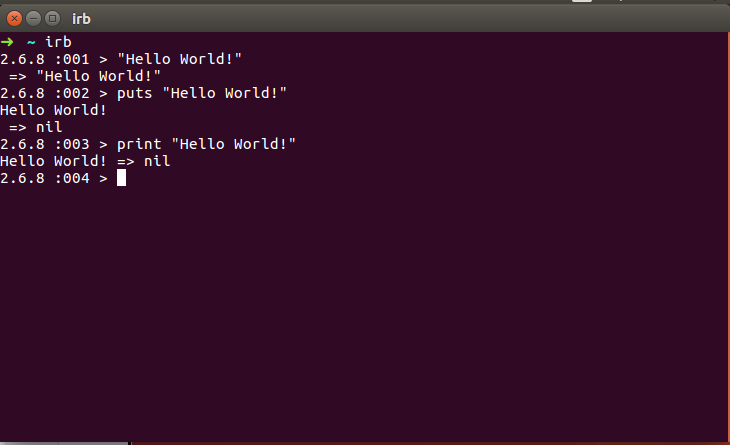 In Ruby, we frequently use the word "puts."

Ruby makes it easy to debug code. Debug is the action of solving errors inside our code. For example, what happens if we copy the word "puts" wrong? 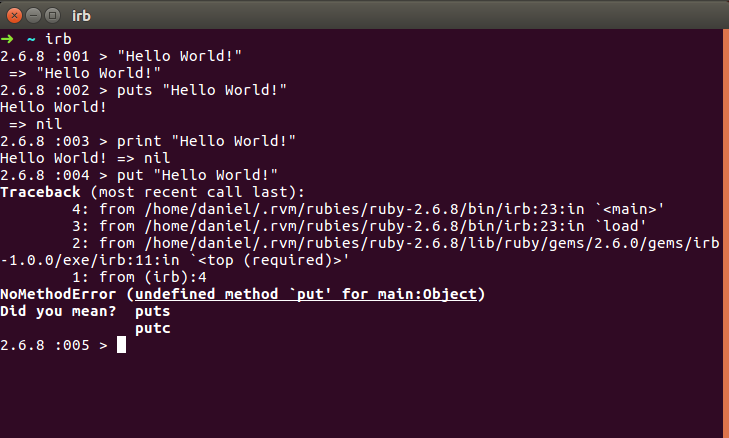 In the beginning, it seems pretty annoying and overwhelming, but it's not. Actually, if you see my last screenshot, we have a "NoMethodError" in bold text. Then we got a question: Did you mean? puts. This is very helpful when we're trying to figure out the error. But what about the Traceback?
The traceback output can be a bit overwhelming if you're seeing it for the first time or you don't know what it's telling you. But the Ruby traceback has a wealth of information that can help you diagnose and fix the reason for the exception being raised in your code. Understanding what information a Ruby traceback provides is vital to becoming a better Ruby programmer.
A traceback is a report containing the function calls made in your code at a specific point. Tracebacks are known by many names, including stack trace, stack traceback, backtrace, and maybe others. In Ruby, the term used is traceback.
When your program results in an exception, Ruby will print the current traceback to help you know what went wrong. In our case, the word "puts" went wrong; it wasn't well written.
It's fair to say that strings can be used with double or single quotes. The only requisite is to open and close with the exact quotes.

If you open with double quotes and close with a single quote, you'll have an error (if you execute the file from a text editor). But if you are running Ruby in the IRB interpreter, the line will remain open until you close with the same type of quotes.

As you can see, each terminal line was interpreted as space.

Later we'll be working with strings more in detail. But, for now, it is enough about strings.

When you're programming, you will face this kind of situation:
The way you can comment a line or lines of code in Ruby is simply using the character "#."
In the command line interpreter (IRB), the output will always be "nil" after a comment. So finally, we print the string "Hello World!" again.

Now let's see another common data type in Ruby: Numbers. There are two types of numeric data in Ruby: Integer and Float
We all know about the numbers, so it is unnecessary to extend too much here. So instead, let's just see how it works in the IRB Console.

At this point, I think we know what we're doing here. Basically, we're summing up to Integers and 2 Floats. The .class method allows us to see the object's parent class. In these cases, we got Integer and Float.

Other standard operators used with the numbers are

What do we have here?
You can test different values here, and then you can check that everything is working fine.

The final data type we'll be seeing here is the boolean data type. Boolean is a data type with two possible values (usually denoted true and false) intended to represent the two truth values of logic and Boolean algebra.
The Boolean data type is primarily associated with conditional statements (we'll be seeing statements in another post), which allow different actions by changing control flow depending on whether a programmer-specified Boolean condition evaluates true or false. It is a case of a more general logical data type (see probabilistic logic)—logic doesn't always need to be Boolean.
Let's check it out inside the IRB Console.

As we can see, we can assign the value of "true" or "false" in Ruby directly. Then we can check the parent class with the method ".class ."To see the actual effectiveness of this data type, we have to see conditionals, which is part of one of the following blog posts

With this, we have enough about the basic data types in Ruby.

Hope you learned a lot

Thanks for reading!
Daniel Morales