Interactive Ruby Console or IRB in Ruby is a terminal where you can test rapid and easy Ruby code. It was made thinking about debugging, playing around with ruby, and doing tests rapidly with any Ruby command inside this console.
You have 2 main ways to access a Ruby Interactive console: a cloud service that runs IRB behind the scenes. The second option is installing IRB in your machine (local or virtual). In previous blog posts, we've been talking about Installing Ruby in Linux and Installing Ruby in Windows. If you've been following these blog posts, you have already installed IRB because it comes as default with all the previous installations.

But before we can understand IRB, we have to know about REPL. REPL is an interactive top-level or language shell. REPL is a simple interactive computer programming environment that takes single user inputs, executes them, and returns the result to the user; a program written in a REPL environment is executed piecewise. In a REPL, the user enters one or more expressions (rather than an entire compilation unit), and the REPL evaluates them and displays the results. The name read–eval–print loop comes from the terms of the Lisp primitive functions which implement this functionality:
Please refer to this article for more details about REPL
I know this is a lot of new jargon, but in plain English, the key concepts we have to take away are:

Now, we can talk about this first solution: Cloud REPL platforms. The first and most well-known cloud REPL platform is called Repl.it. Replit is an online IDE (integrated development environment). The advantage of cloud environments is that you don't need to install anything locally, but you've to create an account in most cases.
This kind of cloud environment supports almost any modern programming language, so if you want to test Scala or Elixir, you don't have to install anything until you're pretty sure that you want to give a real chance to this new programming language. There are other platforms like: https://codeanywhere.com/, https://codesandbox.io/ among others.

Create your own account and once you're inside it, click on the blue Create button at the left sidebar. It will prompt you to a modal window where you can choose Ruby as a Template and give it a name, and then Create Repl

Now, you'll see the Interactive platform with a big green "Run" button at the top bar. Because you've already a "Hello World" string in the left panel, you just need to click that green button.
After that, you'll see the output in the right panel of the Repl.it

2- Accessing to IRB from the AWS Linux instance:

As we mentioned before, almost every modern programming language is distributed with its own REPL. So, the way to access a Ruby REPL is using an Interactive Ruby Console or IRB in your local (or virtual) environment.

Now let's switch to our AWS Linux instance. In your console, login into the virtual machine and then access the IRB like so:

* The first command allows you to enter the virtual machine via ssh keys
* The second command prints your current Ruby version
* The third command, "irb," enter you to the Interactive Ruby Console
Now, you're inside the IRB.

3- Accessing to IRB from the AWS Windows instance

Now let's switch to our AWS Windows instance. Go first to your Amazon Lightsail instance and access the RDP. If you have a Windows local machine, just skip this first step. 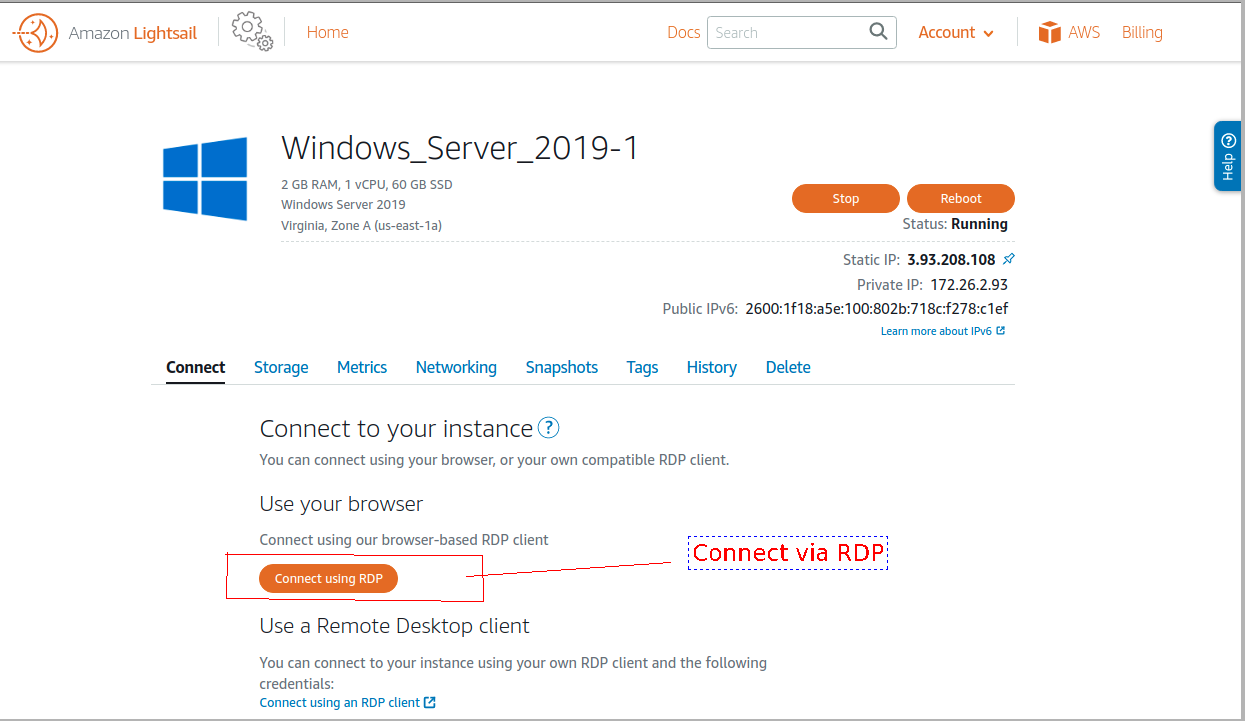 Then, look for the CMD inside the RDP using the search bar. 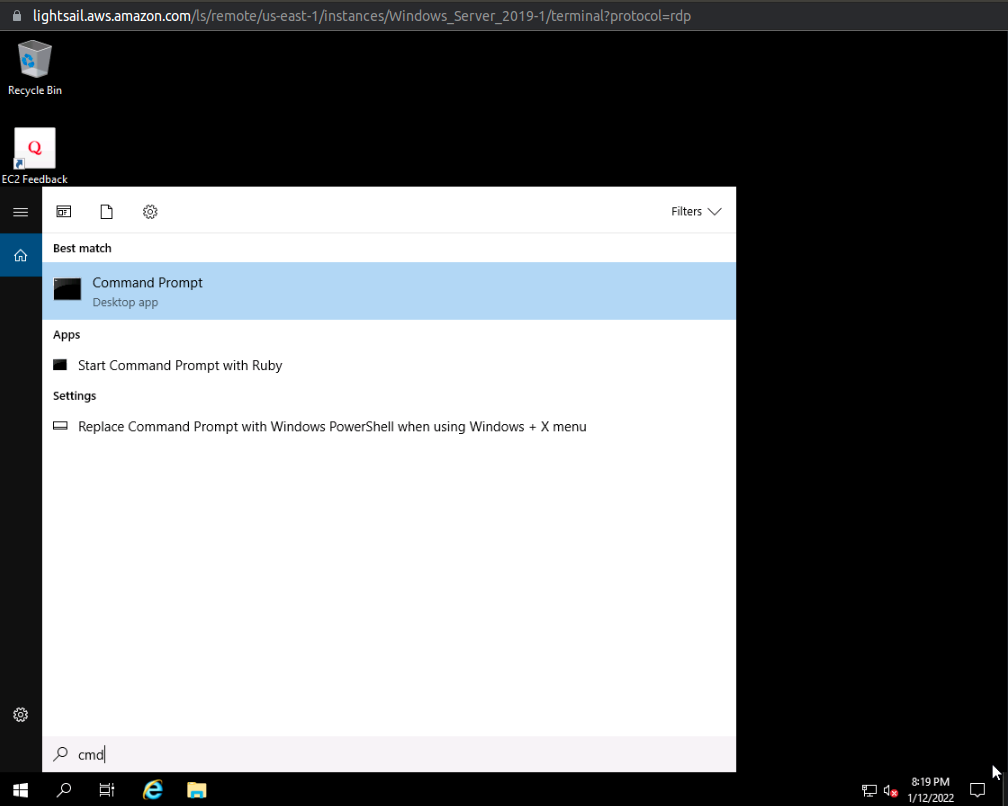 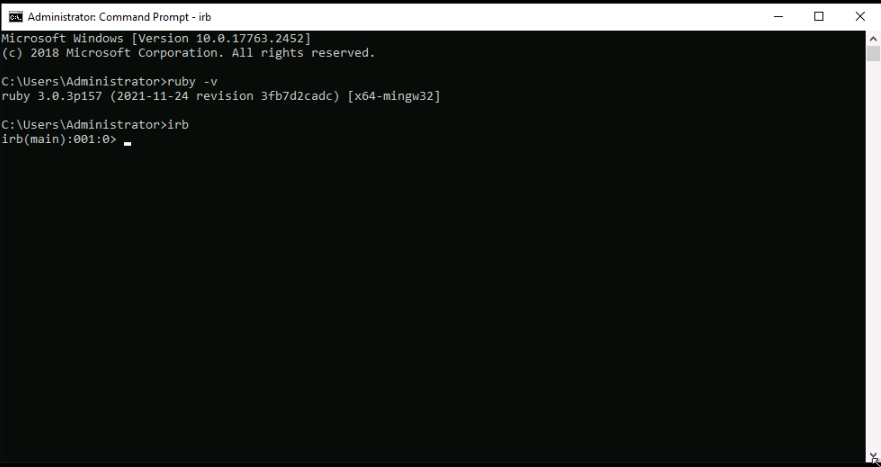 * The first command prints your current Ruby version
* The second command "irb" enter you to the Interactive Ruby Console
Now, you're inside the IRB.

For all the 3 ways we used before to connect to IRB, any of the following commands will work. In my case, I'll focus on the AWS Linux Instance.
1- First steps in IRB
In the first steps (as with any new programming language you're learning), you can test different data types like strings, integers, floats, or arrays.
My screenshot with these commands

This is called "prompt." A prompt is text or symbols used to represent the system's readiness to perform the following command. A prompt may also be a text representation of where the user is currently. Probably you have a different prompt compared with me, but in my case, this is the means.
The first line of code

What does it mean? 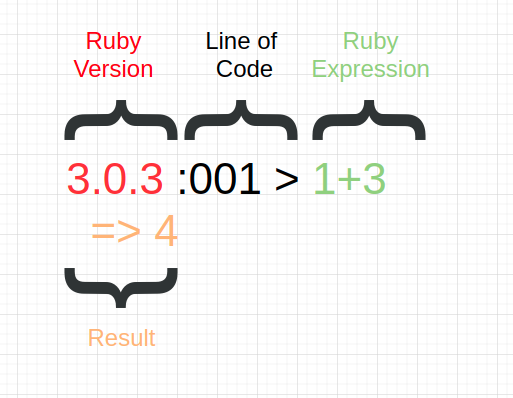 The second line of code

What does it mean? 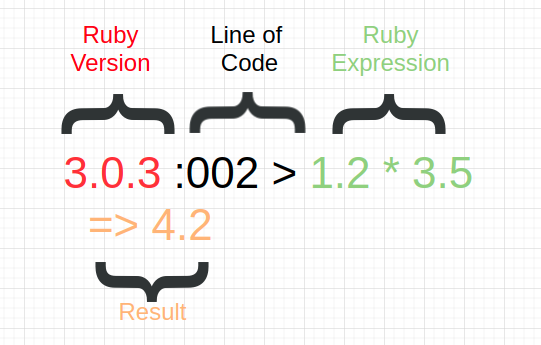 As you can see, once we know the meaning of each line of code, it will become easier to create, debug and test Ruby code inside the IRB console.

I hope you've learned a lot from this post. I'll see you at the next one.

Thanks for your reading
Daniel Morales