Control Flow and Conditionals in Ruby

This is one of the critical things you have to understand very well to become a good developer. This is an extensive topic, so we'll need to explain many things, but the first and most important one is a control flow. 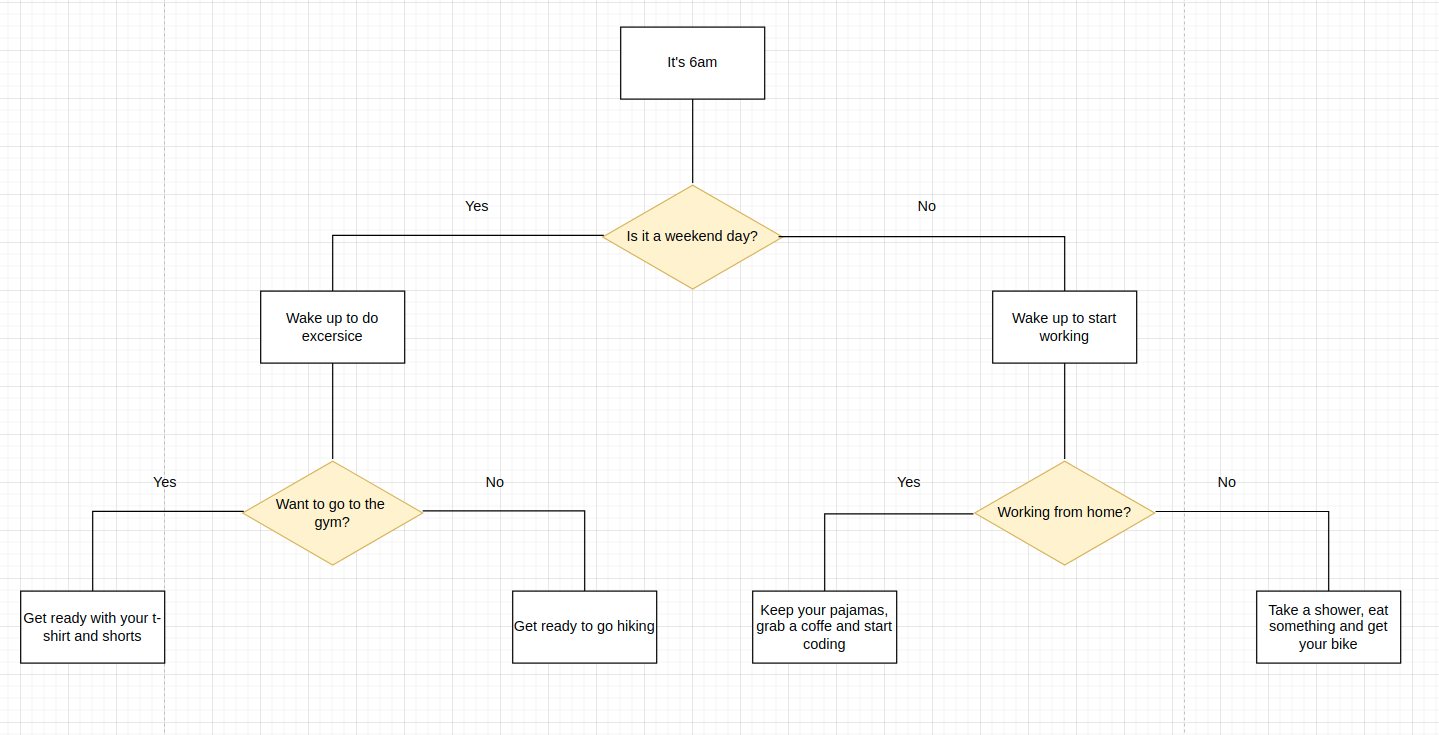 Note: you don't have to wake up on the weekend at 6am, just an example :)
Control flow is a series of steps taken according to an answer or conditional. The conditionals are given inside the yellow isometric square in the image above. These conditionals are constantly evaluated as true or false (in our case, as Yes or No). That's the building block of almost all the code you'll be writing at the very beginning. After that, you'll start evaluating conditionals and doing something accordingly.
This also seems like a decision tree, and actually, it is a decision tree. According to the answers given to the question (conditional), you are falling down. What we need to do here is to translate this diagram to Ruby code. But before that, let's see another vital concept: Comparison operators.

In one of the last blog posts, Ruby Data Types: Strings, Numbers, and Booleans, we studied Booleans. Remember that: "The Boolean data type is primarily associated with conditional statements, which allow different actions by changing control flow depending on whether a programmer-specified Boolean condition evaluates to true or false. It is a special case of a more general logical data type (see probabilistic logic)—logic doesn't always need to be Boolean."
Let's check this concept in our IRB Console again.

As we can see, now we're not using just one equal sign "=" because it helps us assign a value to a variable, as we saw in the last blog post. What we're doing now is a comparison, asking the machine if:
These lines of code can be read as a question or with a question mark at the end. But, of course, you always have to have a true or false result, not something ambiguous.

This is any variable with a boolean value assigned to it, such as True or False, either directly or because it will evaluate some condition. Let's make a couple of examples.

Let’s do it inside our IRB

We've passed the boolean expression "bool_one == true" as an evaluator of the if statement. But we can also do it like this.

But the significant advantage of the boolean variables (and variables in general) is that we have just one place (in theory) where we can change values without affecting the logic developed inside the program. In addition, a variable means that the value inside will change at any moment, so we can have dynamic code with it. In contrast, if we pass values directly, these values won't change dynamically shortly.

So, we have to make the change manually, which is not a good practice.

I guess that these operations are precise at this point of the post. We're executing boolean expressions directly in our IRB console. With the power of Ruby, we can compare Integer values with these comparison operators.

Often the conditionals you will evaluate will require more than two Boolean expressions. You can do this with Boolean operators (also called logical operators). Comparison operators allow us to assert the equality of a statement with Ruby. For example, we can argue whether two values or expressions are equal with ==, or whether one value is more significant than another with >.
However, there are scenarios in which we must assert whether multiple values or expressions are valid. In Ruby, we can use logical operators to make these assertions.
The Boolean operators are:
I know it is a bit weird, but let's explain this more in detail because it is critical. Let's suppose that you want to give access to a user on your webpage, and it depends on the country and the age. Accordion to this use case, we have to evaluate the next conditionals

Easy peasy!
First, we've assigned two variables: "country" and "age," and give them an initial value to each one of them. Then we call the if statement evaluating first the country and then evaluating the age. Both boolean expressions need to be true to execute the code, which is the case. Now let's give access to people from Portugal OR Spain, who have to be older than 18 years. How can we do this?
We've just to change the if statement like so

Now we’re evaluating 3 boolean expressions
The difference here is that the && and || evaluate them accordingly and in order (given the parenthesis). The OR operator is also easy to understand; the whole expression will be true if any of them is true. Let's do an example, where are you from? From Portugal or from Spain? If you are from another country, the result is false. But, on the other hand, the output will be true if you're from these two countries.

Time to see the following concept: truth table. A truth table is a mathematical table used in logic, specifically with Boolean algebra, boolean functions, and propositional calculus.
Which sets out the functional values of logical expressions on each of their applicable arguments, that is, for each combination of values taken by their logical variables. In particular, truth tables can be used to show whether a propositional expression is true for all legitimate input values, that is, logically valid.
If you want to know more about truth tables, please hit this link: https://en.wikipedia.org/wiki/Truth_table.
As always, theory can be more complicated than reality is. Nevertheless, the keys take aways are: 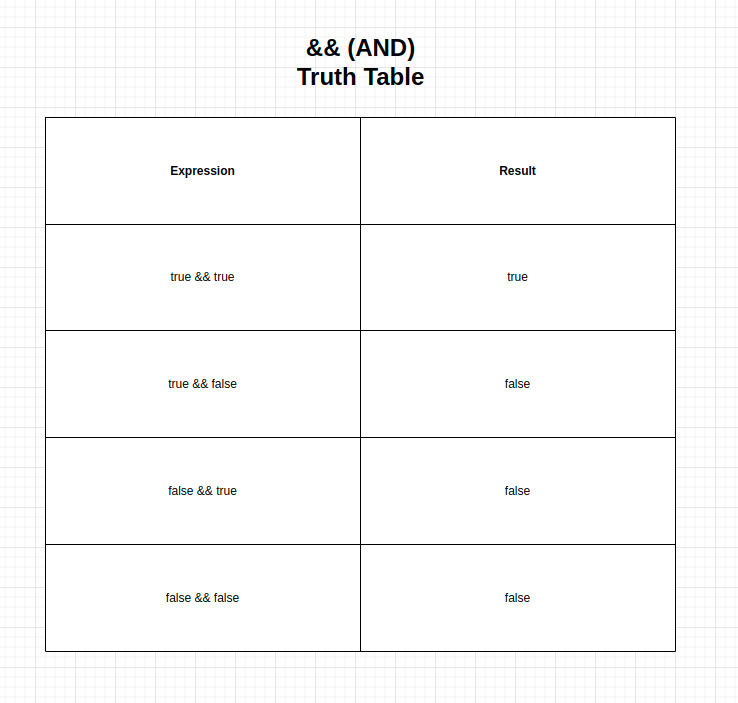 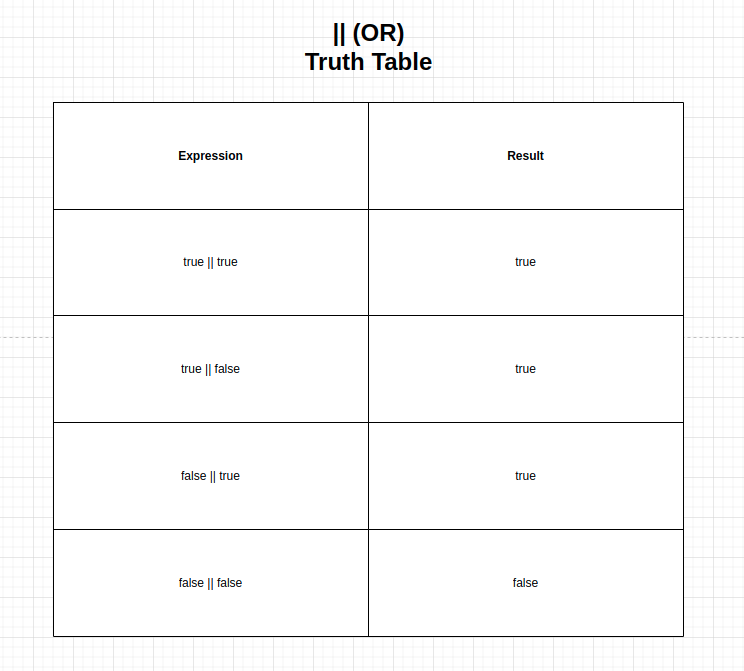 Let's do some coding with this new knowledge.

It's a good exercise if you try to figure out why we are getting these results. But, again, remember to consider the parenthesis and do the analysis after and before the Logical Operator.

Can you figure out why these results? Remember to do this by yourself. The key to understanding how this works is like this:
All right, we're almost done before with control flow and conditionals. So, let's see the following concept "elsif statement."

Elsif stands for "Else if." The Else If statement checks another condition after the previous conditionals if they are not met.

Let's do the code inside our IRB.

Once you start including a lot of IF clauses, the code starts to become unreadable and unintuitive. For this, there are other tools we can use to control the flow. The else clauses allow us to describe what we want to do if the conditions of the previous clause are not met. The else clauses always appear in conjunction with the if-clauses.

Let's do the code inside our IRB.

Seems like our code inside our IRB console is starting to grow, and we cannot differentiate the sentences very well. So, following this blog post about Text Editors, let's do all of this again from Visual Studio Code and execute it with the terminal or console.
First, we create a new file called index.rb

Then we access it from the terminal, and then we execute the command ruby <filename>.rb 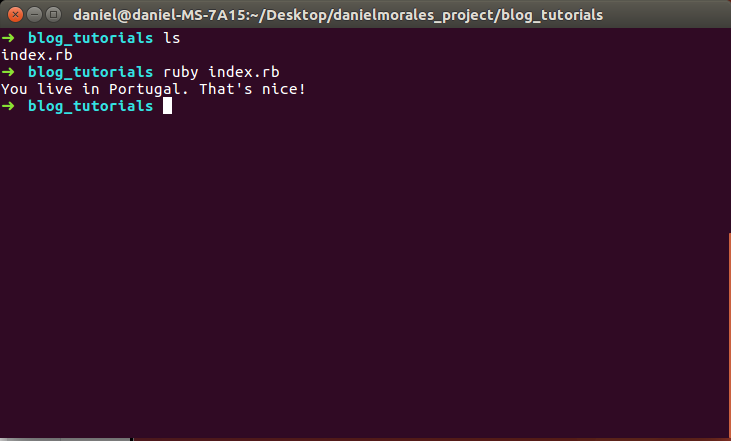 Now let's make it more dynamic. But, first, let's take the user input, as we've learned in the previous post.

Now let's execute it from the console.

Can you figure out the changes we made? We've now a more dynamic code, requesting user inputs. Our program is going to the control flow, asking questions with the boolean expressions and then printing the result according to that evaluation. Pretty nice, no?

I hope you've learned a lot about conditionals. These are the main blocks of any programming language. Later will be doing more exercises to practice this newly acquired skill.