How does Ruby File Management Works?

Sometimes we'll need to deal with file management with Ruby. For instance, you receive a .txt file from your Project Manager (PM), and you have to read what's inside. Other times you have to write something there. Cases like this can happen with different types of files, like .csv, .pdf, .xls, or .txt among others.
This is a common task in Ruby, and you have to deal with them accordingly. Previously, we talked about Ruby Gems; plenty of them help us deal with all these kinds of file formats. Later we'll be studying those formats in detail, but for now, we'll be seeing just .txt file formats and using the built-in "File" Ruby class. Before that, we have to understand what's I/O.

In computing, input/output (I/O, or informally io or IO) is the communication between an information processing system, such as a computer, and the outside world, possibly a human or another information processing system. Inputs are the signals or data received by the system, and outputs are the signals or data sent from it. The term can also be used as part of an action; "perform I/O" is to perform an input or output operation. For more info about I/O in ruby, please go ahead here.
Ruby provides a whole set of I/O-related methods implemented in the Kernel module. All the I/O methods are derived from the class IO. The class IO offers all the basic methods, such as read, write, gets, puts, readline, getc, and printf.
So far, we've seen a couple of them, like the "puts" command print something on the console or the "gets" command to receive user inputs. Next, we will see the "read" and "write" commands. But after that, let's check the class "File" in Ruby.
A "File" is an abstraction of any file object accessible by the program and is closely associated with class IO. So, let's check how it works.

So, as you can see, there is a lot of attention under the delimiters. Basically, if you end a line of text, it will be followed by an "enter" or a "line space," which will be the End of the Line. And that's how text files store data (line by line) and is how we can create, read, edit or delete such textfile.

First, we need to create a new text file under our folders that will contain the .txt File. So let's begin.

Now let's open it from our Text Editor and start wiring something inside the text file. But, first, let's do something straightforward: 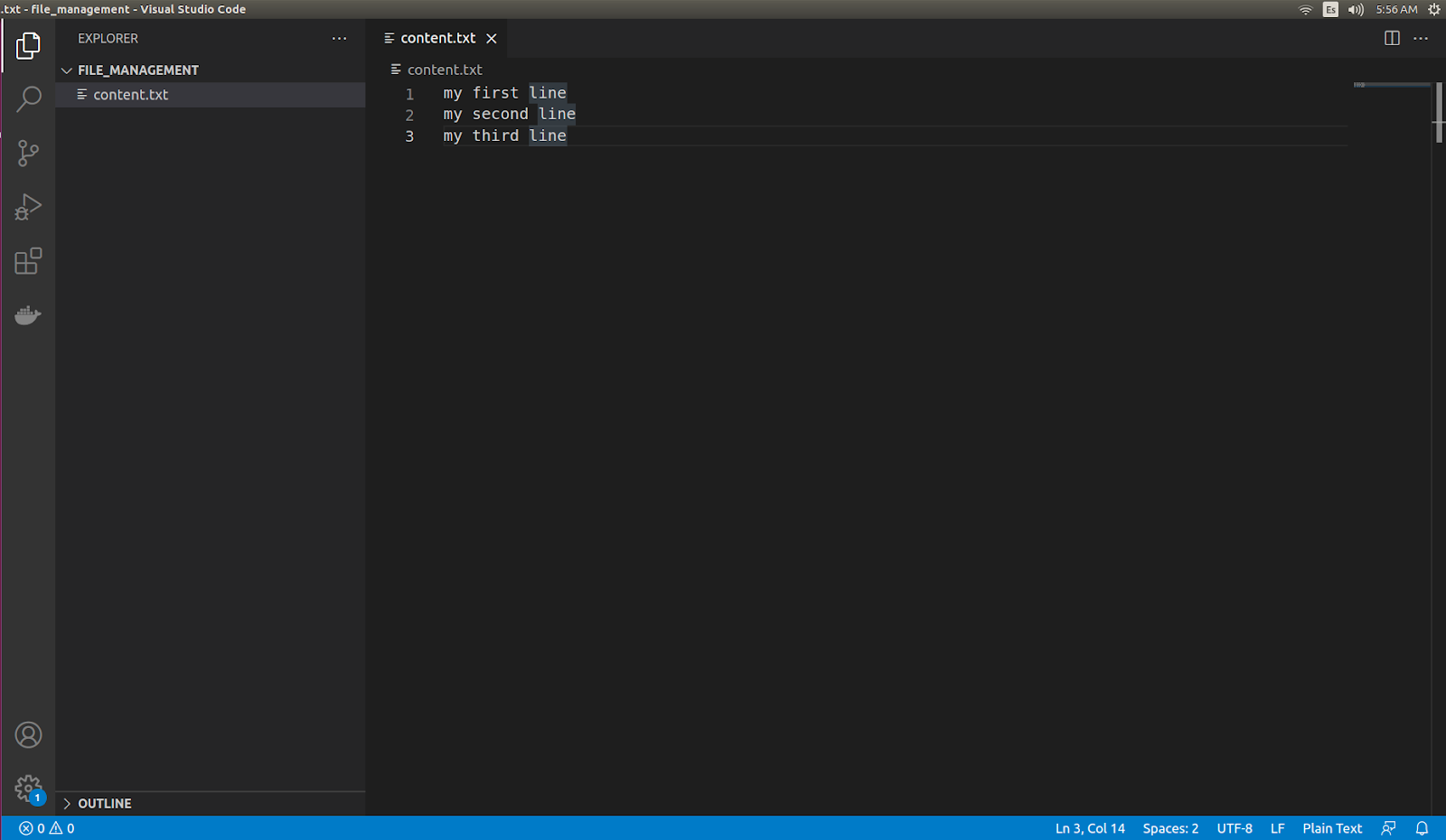 With the File created, we're ready to use the Read method from Ruby. To do this, we have to know the File class in ruby. The File class in Ruby is an abstraction of any file object accessible by the program and is closely associated with class IO. But here, you're probably confused because you could ask what the difference between I/O Ruby Class and File Ruby Class is? An excellent question to ask, and here is the answer: since File is a subclass of IO and it does not have the read method when you invoke File.read, you are actually calling IO.read no difference here.
Now we can go ahead and call the ".read" method. Go to your console, access the folder "file_management," which we created before with the command mkdir (where we have the file content.txt), and open the IRB Ruby console.

We've invoked the Read method from I/O through the File class in Ruby. However, the output seems a bit weird, and it's because of the End of the Line. We have line breaks in your original document, so ruby reads and prints the result by adding \ instead of EOLs. If we want to get the same output as the original, we can follow 3 basic steps:

As you can see, the "split" method is the key here because we choose the pattern "\n" as the rule to separate each line of text and save the result as an array of different sequences of text.

Now let's use the" .write" method. This method doesn't need to have a file previously created. It does for us to check if the File exists; if so, they overwrite the File with the content we pass through the method. If the File doesn't exist, it creates it and adds the content. So let's do it. 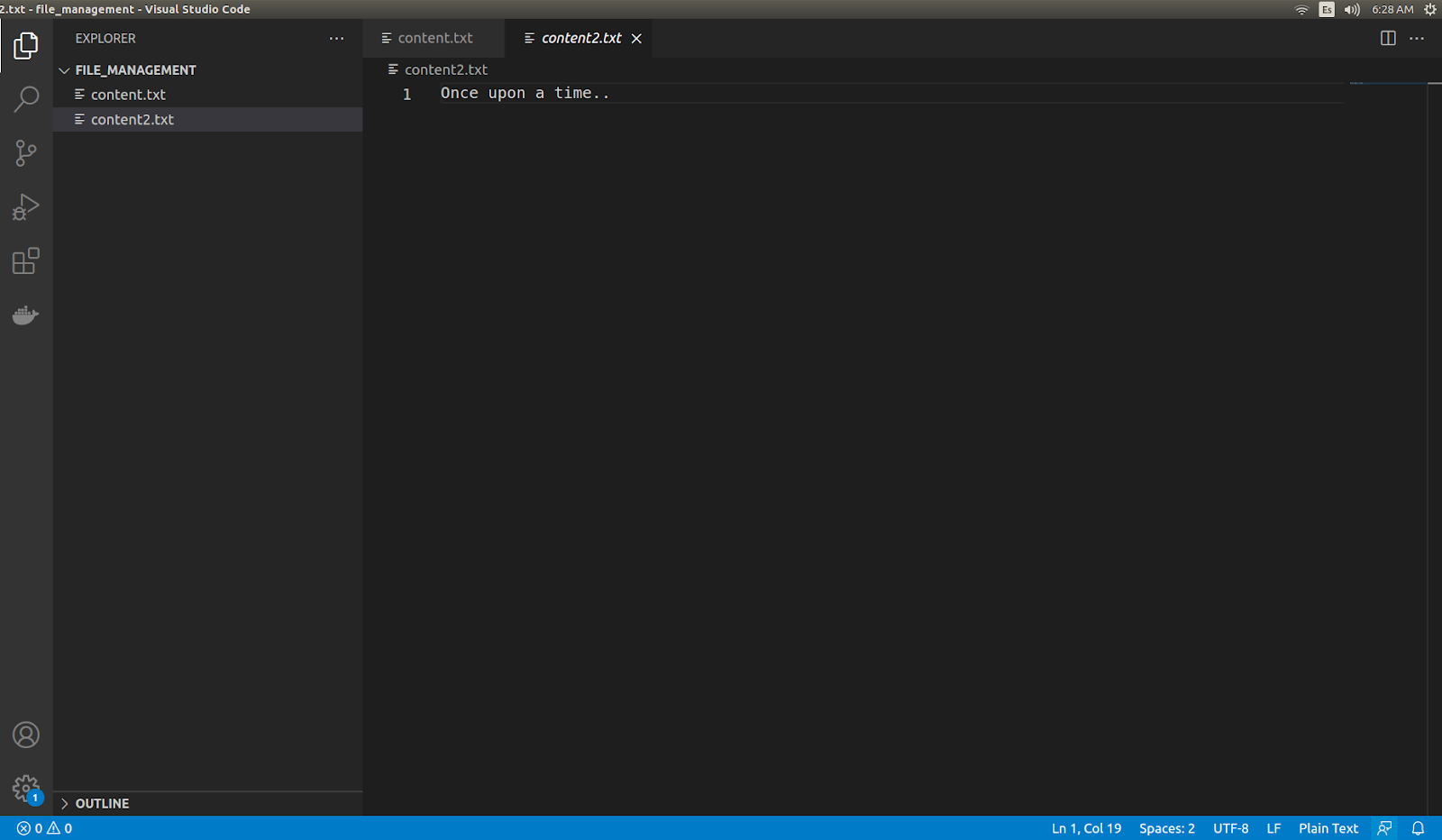 We have the new File created and the text inside it. Awesome! But what happens if we try to add different content with the same command?

It will overwrite the current one. BTW the 18 number refers to the number of characters we insert in the File 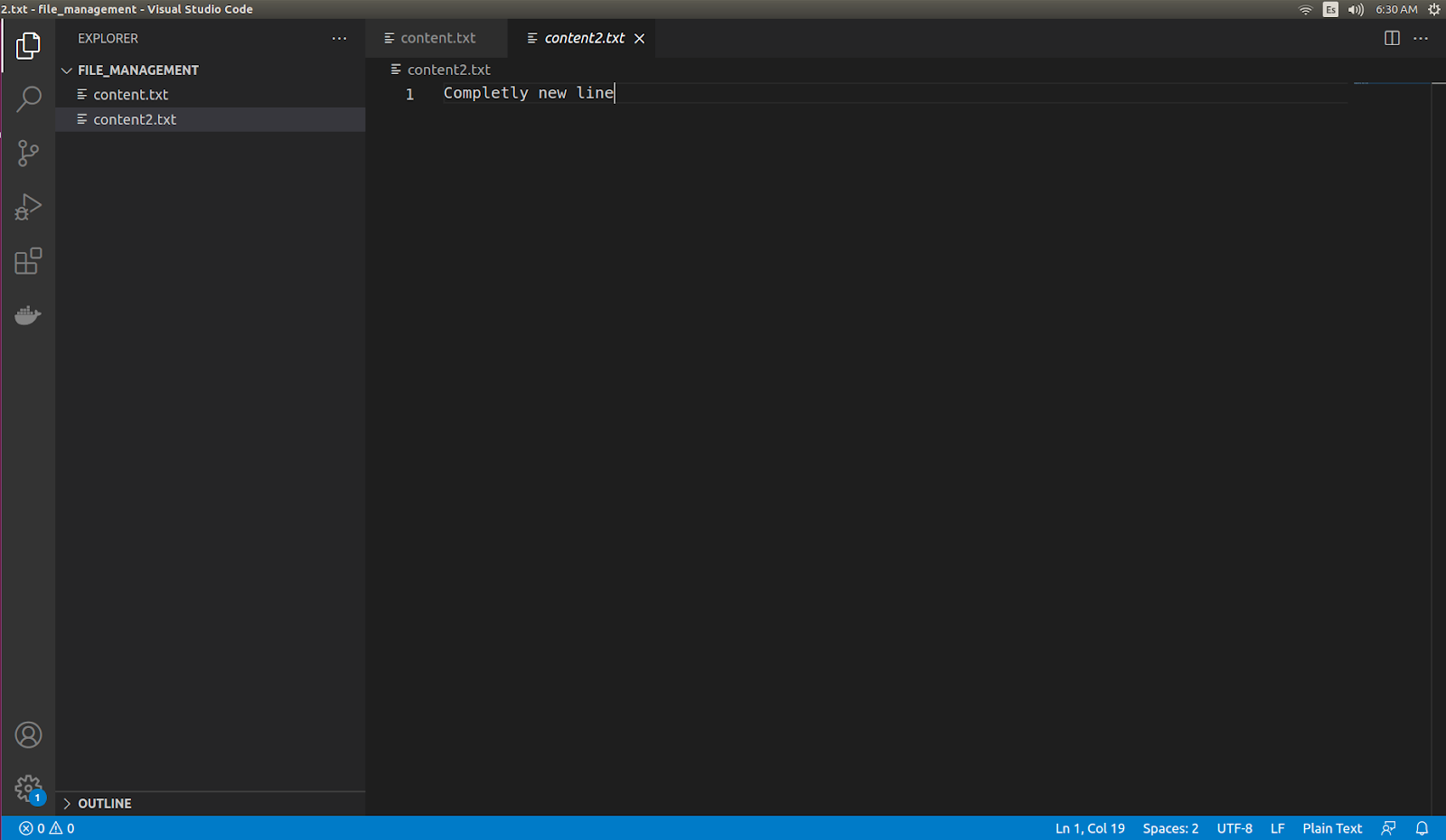 And that can become a problem for us. So here is where the "Open" method comes in help.

The "Open" method allows us to be more organized and follow similar behavior as we write directly in the files as human beings. We have to first open the File, then keep it open until we write, and then close the File when we finish. If we need to add more content, we follow the same steps. So let's do it but from our console.

Let's check what we did here: 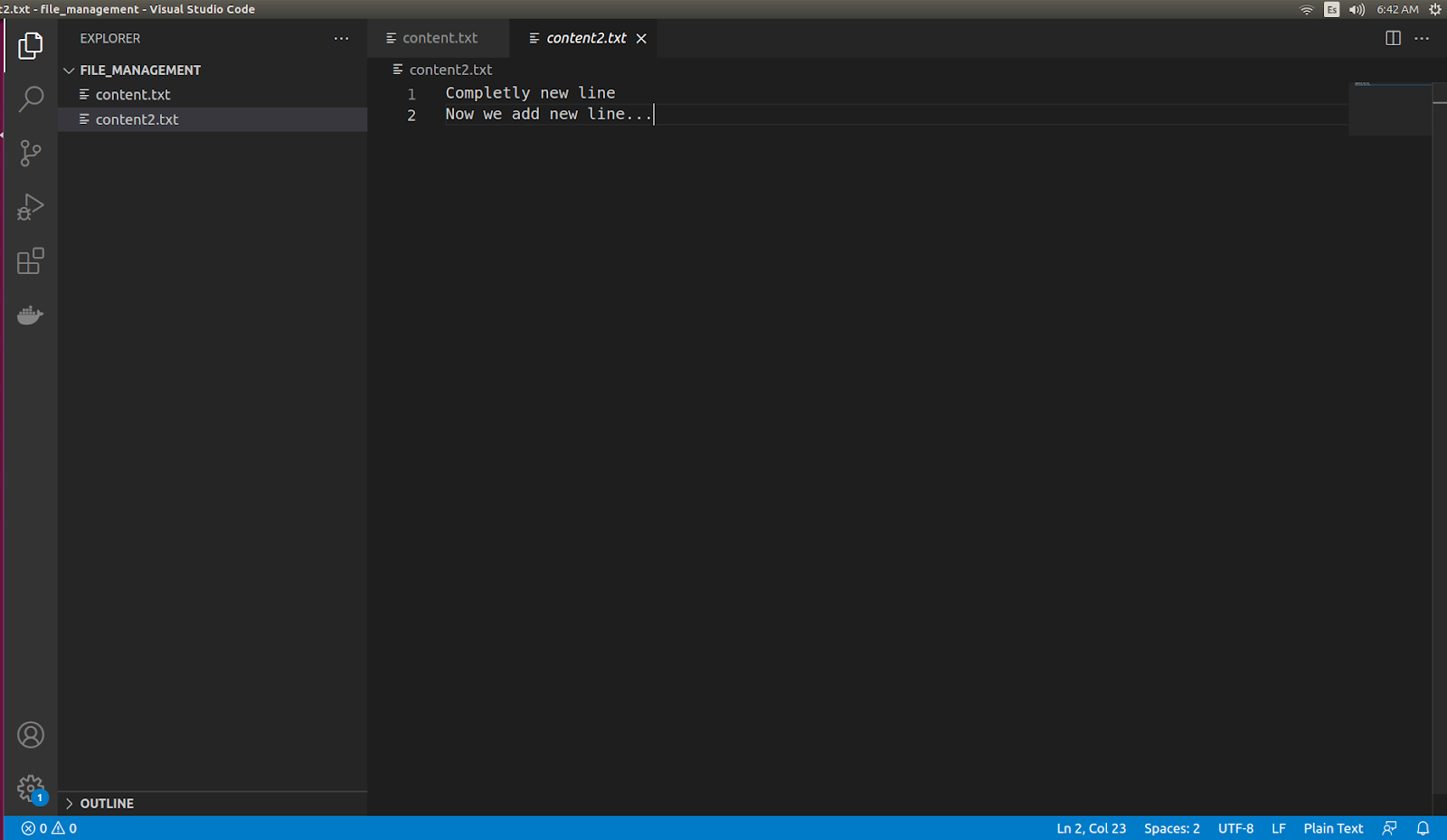 We added new text without overwriting the current one. That's awesome!

This is technically called I/O Open Modes. This is because Ruby lets you open a file with different permissions (modes). For example, you can open a file in read-only mode, write-only mode, or read-write mode. Here you have a description of each one of them.

We have these 6 basic open modes. We've used "a+" to append data at the end of the File. And with the help of the character "\n" to do the breaking.
As always, there are a lot of methods to use here with File class or IO class in ruby, and here you can find more details about them:
IO Class 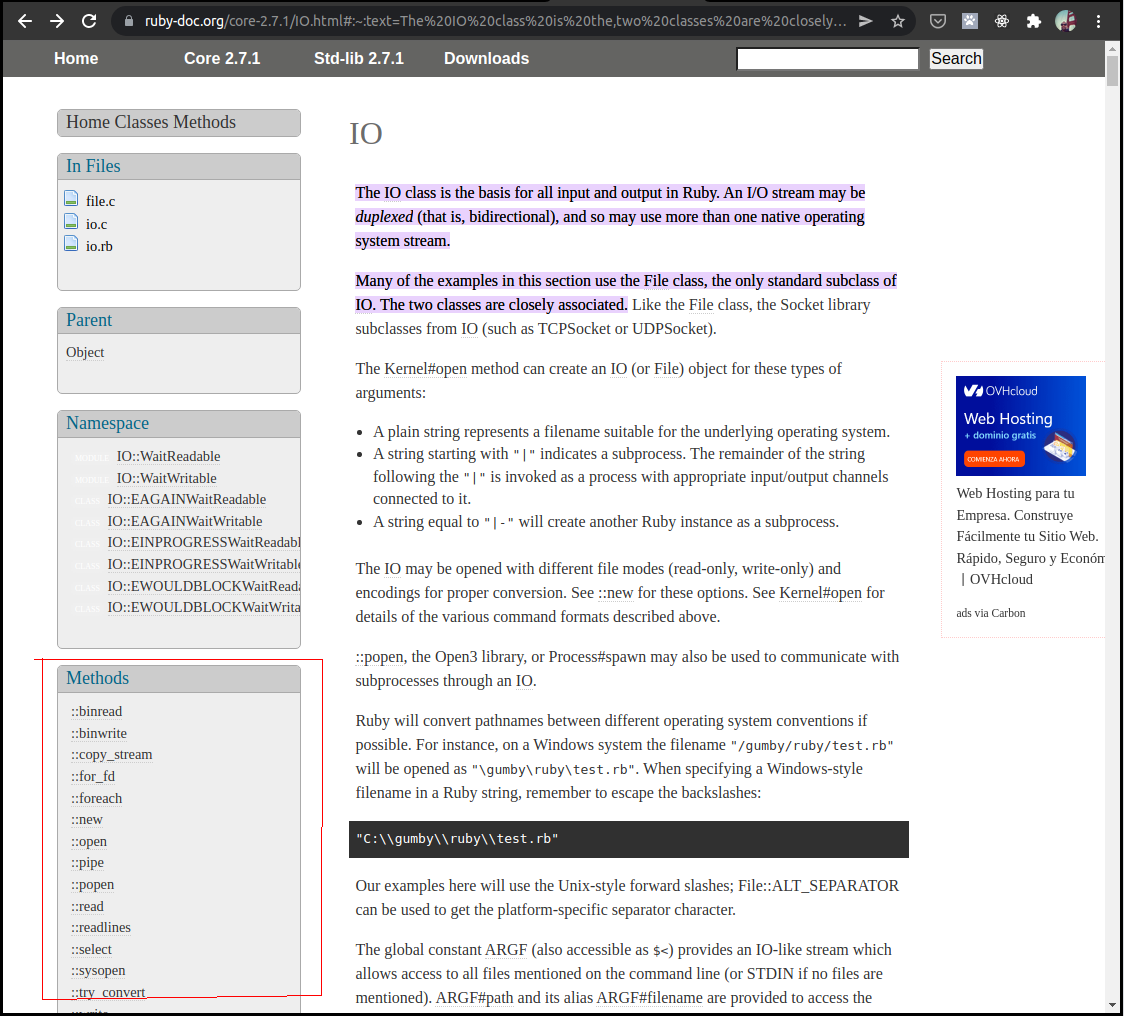 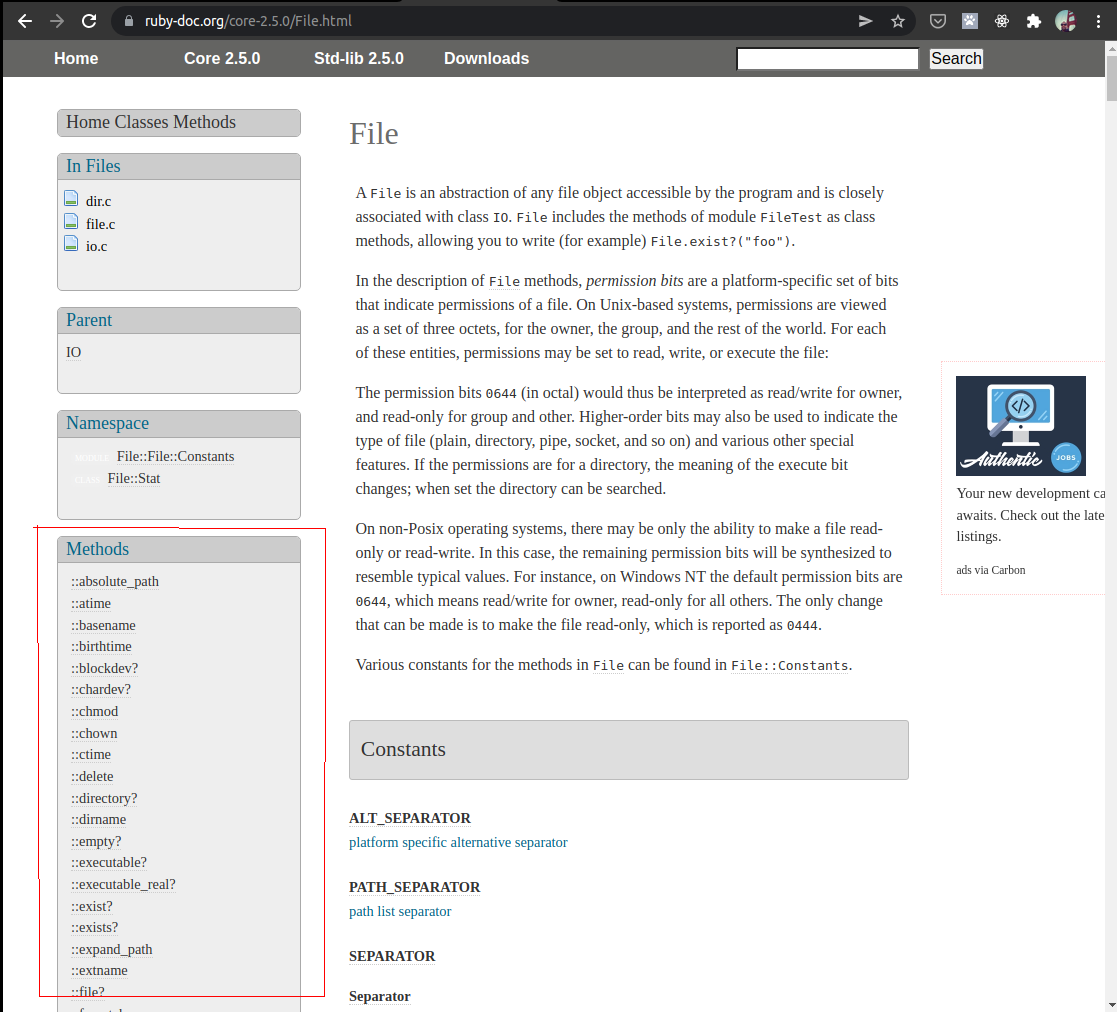 Are these used in real-life scenarios?

Probably you're asking yourself if these kinds of features are requested in real-life projects. The answer is it depends. Some solutions will need that you deal with text files. Some others don't. The reality is that you won't use this too much in your day-to-day job, but it is an excellent idea to know the basics about it. For that reason, we're not going deeper here (probably in the future blog post), but if you're required to work with file texts, you know that Ruby can deal with it efficiently.
For now, I hope you have learned a lot.
Thanks for reading!
Daniel Morales