So far, we've been talking about the initial setup or configurations you've to have in your machine just to start creating your code in any programming language you want. For that reason, we have talked about Versioning, Package Managers, different Operating Systems, Text Editors, Console or Terminal, and Git & GitHub. This stuff seems irrelevantly separated, but now we have to make sense of all of this once we see a programming language like Ruby.

But to understand Ruby, as always, we'll need to figure out the primary and theoretical concepts behind it. With that, we'll have enough context about what we want to study today.

Now that we know a bit more about programming languages, the next question is what an algorithm is. IS is far enough to say that the algorithms are the set of instructions we create with a programming language. It's like studying a new language like French: you have all the possible vocabulary at your hand (that's the programming language), but you start building stories. Each story is like an algorithm. If you want to tell a story to your friends in French now, you have to create an algorithm (create your account) that makes sense and get some output.
More theoretically speaking, In computer science, an algorithm is a finite sequence of well-defined instructions, typically used to solve a class of specific problems or perform a computation.
Algorithms are used as specifications for performing calculations, data processing, automated reasoning, automated decision-making, and other tasks. In contrast, a heuristic is an approach to problem-solving that may not be fully specified or may not guarantee correct or optimal results, especially in problem domains where there is no well-defined correct or optimal result.
As an effective method, an algorithm can be expressed within a finite amount of space and time and in a well-defined formal language for calculating a function. The instructions describe a computation that, when executed, proceeds through a finite number of well-defined successive conditions, eventually producing "output" and terminating at a final ending state. The transition from one state to the next is not necessarily deterministic; some algorithms, known as randomized algorithms, incorporate random input. If you want to know more details, please hit this link.


What's the difference between compiled languages and interpreted languages?

Another important concept we've to know inside the programming world is the difference between compiled and interpreted languages. To understand this concept, we have to pay attention to the most crucial step here: "Compilation."
Let's make an example of a compiled language
Let's do the same example but with an interpreted language 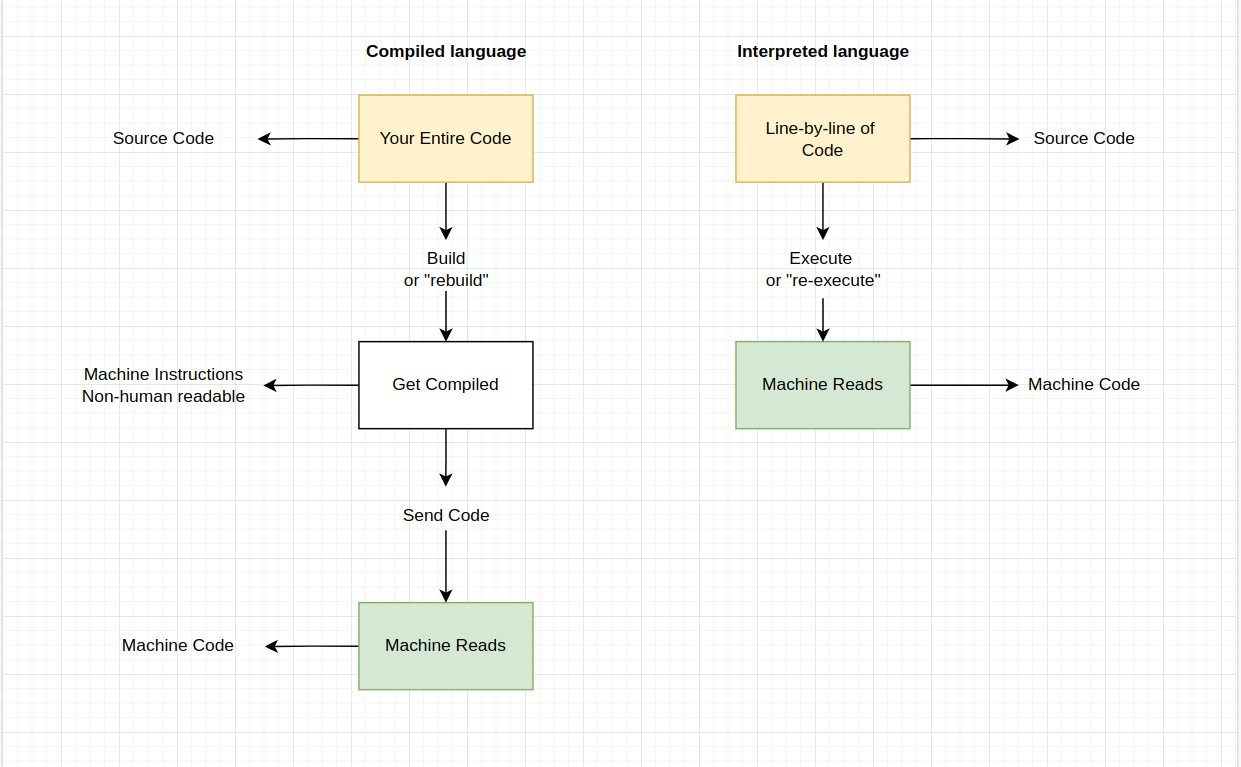 We can now see some differences and similarities between the two. But take care, each one of them has its own pros and cons, so it's better to understand both in more detail. BTW, Ruby is an Interpreted Language.

A compiled language is a programming language whose implementations are typically compilers (translators that generate machine code from source code), not interpreters (step-by-step executors of source code, where no pre-runtime translation occurs).

The term is somewhat vague. In principle, any language can be implemented with a compiler or an interpreter. Combining both solutions is also common: a compiler can translate the source code into some intermediate form (often called p-code or bytecode), which is then passed to an interpreter who executes it.

An interpreter is a computer program that directly executes instructions written in a programming or scripting language without requiring them previously to have been compiled into a machine language program. An interpreter generally uses one of the following strategies for program execution:
While interpretation and compilation are the two primary means of implementing programming languages, they are not mutually exclusive, as most interpreting systems also perform some translation work, just like compilers. The terms "interpreted language" or "compiled language" signifies that that language's canonical implementation is an interpreter or a compiler, respectively. A high-level language is ideally an abstraction independent of particular implementations. For more details about this, please refer to this link.
Also, you can find a good blog post about more differences here: https://www.freecodecamp.org/news/compiled-versus-interpreted-languages/.

With all of this stuff related to compiled and interpreted languages clearly, we can now define and better define what Ruby is: Ruby is an interpreted, high-level, general-purpose programming language that supports multiple programming paradigms. It was designed with an emphasis on programming productivity and simplicity. In Ruby, everything is an object, including primitive data types. In Japan, it was developed in the mid-1990s by Yukihiro "Matz" Matsumoto.
Ruby is dynamically typed and uses garbage collection and just-in-time compilation. It supports multiple programming paradigms, including procedural, object-oriented, and functional programming. The creator influenced Ruby by Perl, Smalltalk, Eiffel, Ada, BASIC, and Lisp.
As you can see, there are a lot of terms we refer to here, and maybe we'll need more, but for now, it is evident what kind of category of programming language is Ruby. With all of this theory in place, now we can start coding some basic commands in Ruby.

I hope you learned a lot; see you in the next post.